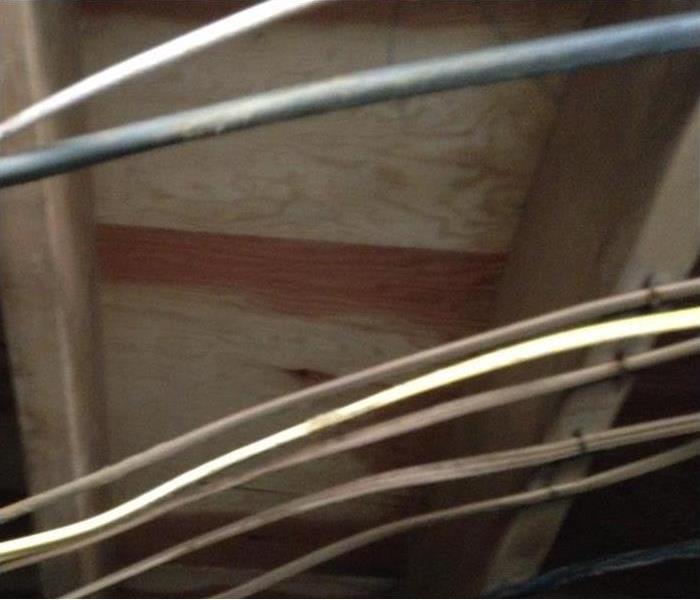 Needing nothing more to thrive than moisture and oxygen, mold in this Cutler Bay crawlspace grew unchecked after a water incursion. The homeowner became concerned at increasingly musty odors emanating from the floor and arranged for a mold inspection. Remediation and removal were the recommendations of the SERVPRO mold specialists, who responded after viewing the fungal colonies expanding across the floor joists.

Does the Type of Mold Determine SERVPRO's Mold Remediation Response in Cutler Bay?

Roughly 100,000 species of mold exist, some of which affect homes in Cutler Bay. The mold colonies seen in this crawl space are white with a tan to brown surface. They look almost fluffy, like blobs of muddy shaving cream adhered tightly to the wooden framing beneath the home's floor. As the mold colonies expanded, the fungus's hyphae, root-like projections, infiltrated the cellulose fibers of the wood. Although household molds have different appearances, SERVPRO uses the same basic protocol developed by the Environmental Protection Agency (EPA) for remediation of any species:

- Removal of the mold and moldy materials

- Cleanup, collection, and disposal of debris according to local regulation

What Types of Techniques Did SERVPRO Use for this Mold Removal Project?

The SERVPRO team donned personal protective equipment (PPE) and sprayed the crawlspace with the prophylactic treatment of EPA-registered antimicrobial to limit spore spread during the job. Technicians used mechanical means to detach the visible mold and the infiltrated hyphae, including:

SERVPRO mold specialists here had the challenge of removing even deeply embedded mold fragments in wood joists which were vulnerable to continued deterioration because of their porous characteristics. The expense and disruption of removing and replacing the wood would have been a crushing blow to the homeowner. Scientifically-based blasting technology avoided that outcome:

- Sodium bicarbonate (essentially baking soda) and compressed air combine to target and blast off the residual mold with minor damage to the wood.

Clean, smooth joists remain in the Cutler Bay crawlspace, providing strength and integrity to the home's structure. The after picture is a testament to the skills of the SERVPRO crew and the advanced methods used. Give SERVPRO of Cutler Bay a call at (305) 278-8484 if you suspect mold damage in your home.

View More Before & After Photos