When Fire Strikes in Cutler Bay SERVPRO Is There 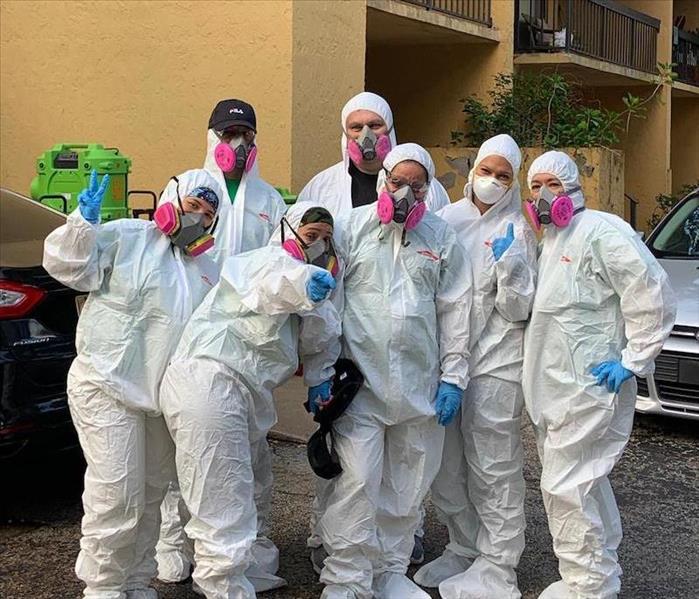 Cutler Bay was named after Dr. William Cutler. Dr. Cutler was from Massachusetts and visited the area in 1880. He liked it so much that he encouraged folks to come and settle there. This would become the town of Cutler.

One of Cutler Bay's claims to fame is the Cutler Fossil Site. It is a sinkhole where not only Pleistocene animal bones have been found but artifacts from those who lived during the Archaic period and of Paleo-Indians. The site is located on the Charles Deering Estate and was discovered in 1979. A group was out hunting for wood to use in making knife handles. They noticed that some of the "wood" that they found seemed exceptionally hard. It was determined to be horse's teeth, according to an archeologist. An official excavation began in 1985.

The site was on the road to becoming a historically registered site, but the Deering Estate protested. If that were to happen, the area on the estate could not be developed. Miami-Dade County purchased the site, and it is now included in the Charles Deering Estate State Park.

The sinkhole is part of a karstic limestone formation on the Miami Rock Ridge. It is approximately 26 feet by 33 feet. The fossil layer extends beneath the water table. The owners of the Deering Estate funded excavations in 1985 and 1986.

Thousands of bones were discovered in the sinkhole. They excavated portions of:

The mixture represented led the archeologists to believe that there was standing water for a portion of the year during the Pleistocene Period. Nearby were pinelands, marshes, hardwood hammocks, the sea coast, and grasslands. Animal and bird fragments discovered included:

Some of the animal remains found were burnt. The sinkhole did not have natural fires, so the indication would be that humans were responsible. Human teeth and bones from approximately five different people were discovered, including adults and a young child. Stone tools and marine shells used as tools were at the location, as well as arrowheads. Some of the artifacts are thought to be Paleo-Indian.

Also discovered around Cutler Ridge were Tequesta Burial Mounds. The Tequesta tribe is believed to have been in the region since the 3rd century BCE. This Native American tribe had little to no contact with white settlers and had migrated out of the area by the mid-18th century. Tequesta was their principal town, named by the Spanish after the chief, and was situated along the north bank of the Miami River. Their custom was to place their camps and dwellings along water such as rivers, streams, and inlets to the ocean.

The Tequesta were hunters and gatherers. They fished and hunted, with much of their food coming from the sea. They did eat local fruit and plants. Hernando de Escalante Fontaneda lived with the tribe in the 16th century. He dwelled with them for 17 years and wrote about their lifestyle. He stated that they ate:

Although conches, clams, and oysters were plentiful, they did not seem to eat them very often. They consumed plants such as prickly pear, palm nuts, and saw palmetto berries.

Everyday Life for the Tequesta Tribe

The huts they dwelled in could be quite tall, up to 5 stories. They wore very little clothing. Women wore skirts made of plant material, and men wore deer hide loincloths. There are different ideas on the traditional burial of their chiefs. It seems in both versions the small bones were buried, and the large bones were kept. They seemed to worship animal representations of gods. Humans were thought to have three souls – one in the reflection, one in the eyes, and one in the shadows. They may have practiced human sacrifice as part of their religious ceremonies.

The Railroad Comes to Town

The Florida East Coast Railway was extended in Cutler in the early 1900s. This made the city a place of business, and the economy grew as those in less developed towns would come to Cutler for supplies.

Hurricane Andrew hit near Cutler's Ridge in 1982. It pretty much destroyed the area. The damage to Florida was approximately $25 million, and almost every structure suffered significant damage. It took several years for the area to rebuild and move on from the impact of Hurricane Andrew.

When Hurricane Andrew hit, it did more than cause flooding. Power lines were down, high winds impacted homes, and other situations were present that caused fires. A fire can strike at any time. In homes, kitchen fires are the most common. Whenever there is a blaze, you can count on SERVPRO to mitigate the damage and leave your home, "Like it never even happened."

Even if the incident in your home seems like a small one with only smoke damage, you should still call in the professionals. There are several kinds of smoke residues, and understanding each one's makeup is fundamental to removing it. If you try to clean it and use the wrong type of cleaner, you are going to make it worse. Our technicians:

Contact SERVPRO of Cutler Bay at (305) 278-8484 for fire restoration services. We're Faster To Any Size Disaster.